China, a rising global superpower to the United States, was stricken by a coronavirus virus named COVID-19. In December 2019, China was the first country where CoronaVirus started at a meat market. How can you expect the economy to grow with a virus pandemic? China took aggressive actions in January to lock the city of Wuhan down and other cities.

China is a completely different country in terms of global power compare to 16 years ago. CornaVirus is a serious threat to the global economy.

Some economics are looking at 2002–2004 severe acute respiratory syndrome (SARS) as a historical example, a coronavirus that started in China, with 5,400 cases and 350 deaths. SARS event is nothing similar to today’s COVID-19 due to the number of cases and China’s global influence. Coronavirus-19 has already affected 80,932 Chinese people with 3,172 deaths.

China and the United States are adversaries but are closely connected to each other’s economies.

How was China’s Economy effected by the COVID-19?

China’s government immediately closed factories in January 2020 and pushed many to stay home. This caused a ripple effect throughout the world! Many companies that had exports from China were now affected and did not have supply. The figure below shows exports in China by USD billions. During January of every year, China celebrates the Lunar New Year holiday. February typically is the lowest number of export per year. January 2020 experienced a low number of exports compared to other January of previous years.

General Administration of Customs of the People’s Republic of China (GACC) released data for January and February combined on March 07, 2020. China’s foreign trade of goods fell 11 percent year on year in the first two months of this year to $592 billion. Exports fell 17.2 percent year on year to $292.5 billion during the period, while imports decreased 4 percent to 299.5 billion dollars. The trade deficit stood at $7.09 billion, while the trade surplus was $41.5 billion in the same period last year.

Manufacturing PMI (Purchasing Managers’ Index) is an index of the prevailing direction of economic indicators in the manufacturing sectors. China Manufacturing PMI was dropped significantly in February to 40. Above 50 is an expansion compared to previous months while below 50 is a contraction.

Many Chinese factories are reopening in March. Only time will tell how will March numbers look like. March will not look good compare to other March from previous years. It may take a few months, to get back to normal exporting and importing levels since the COVID-19 is a pandemic. Even if COVID-19 subsides in China, many countries are still affected. Many countries whose economies by trade are connected to China will be affected. A domino effect is playing out in the whole world now.

China is a global trading partner, and if other countries are hurt by COVID-19, China will be too.

Consumer Spending and Confidence went down

Consumer spending and confidence will not pick up quickly since other countries in the world are now batteling COVID-19.

An oil crisis is now underway in the world. China was the #2 consumer of oil in 2017 and #4 producer of oil in 2018. China needs 8.76 million barrels of oil from other producers. China was the catalyst for the current oil war and started to import less oil since the government halted the economy. This lead to oil demand decreasing which cause Russia to take advantage of the situation to undermine other oil exporters.

China was the catalyst for the current oil war and started to import less oil since the government halted the economy.

China’s demand will gradually increase to somewhat normal in 2-8 months which may cause Russia to renegotiate terms with Saudia Arabia. If the oil war continues for 2+ months, it will be devastating to China’s oil industry. Many countries’ oil industries can not survive with cheap oil below $40. If COVID-19 strikes again and causes another halt, the oil price war may continue! I do not believe oil demand will quickly go back up in one month but will take a few months to go back to normal consumption.

Planes and global tourism were the reason why COVID-19 spread quickly throughout the world. Nobody is visiting China at any time soon and vise versa. Flights have been canceled around the world to China. America and many other countries banned flights at the beginning of January 2020. In 2016, China had 59.27 million tourists. Tourism will be significantly decreased across the globe for a few months. 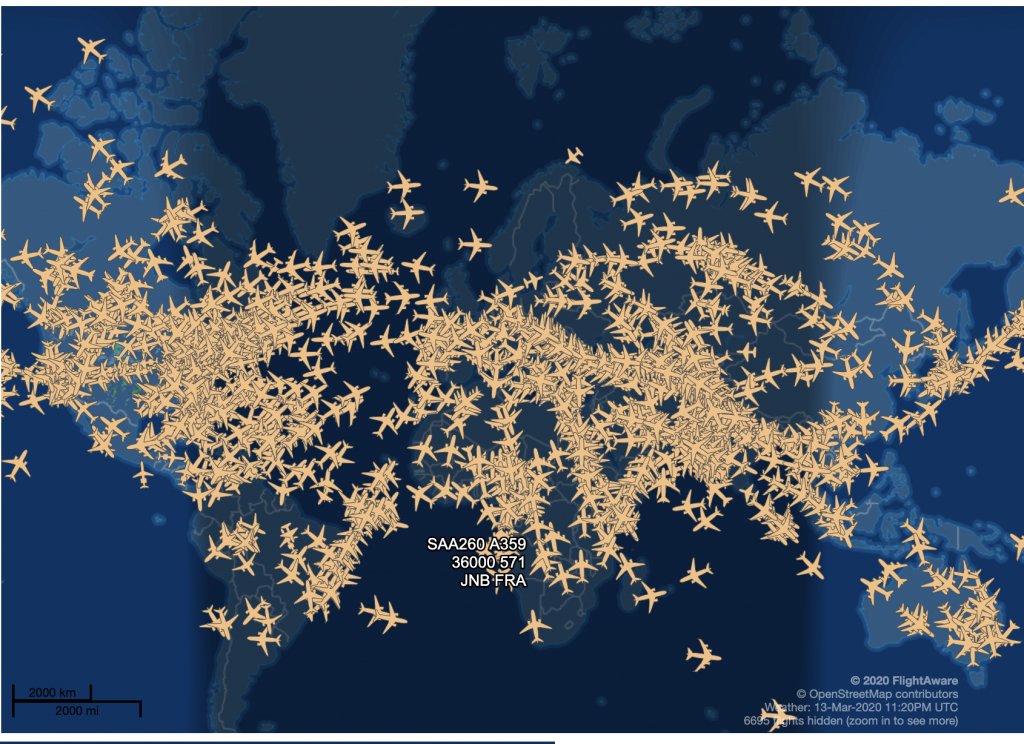 This is the current map of planes by FlightAware flying on March 13th, no wonder the Virus is spreading quickly around the globe. Many seats are now empty!

What is the future of China’s economy?

Gross domestic product (GDP) is a monetary measure of the market value of all the final goods and services. China’s GDP is reaching 6% yearly, but in 2020 will probably be much lower than 6%.  There are 4 GDP quarters in 1 year! The past GDP quarter growth was between 1.8% to 1.4%. Q4 GDP 2019 was not bad and was similar to the past 10 years. In 2019, China’s GDP growth was slowing down significantly due to a trade war with the United States.

China is resuming factories in March. Depending on how March and April go, maybe China will be able to get their economy running again. But COVID-19 should not be taken lightly and could easily reemerge after China removes restrictions. Manufacturing production is not the major concern, but global trade, consumer spending, tourism, oil war can not be quickly fixed by China administration.

Other countries are now batteling COVID-19 which means China’s economy may still be in trouble.

I project future yearly GDP growth for China in 2020 will be 5.5% or under. It may go down to 4% worse due to continued stress by COVID-19 on the global economy.

China is a global power. America and other countries will probably go into a recession!

China’s economy may be in the slump for 2-12 months and could be possibly much more if COVID-19 strikes back. China will fall into a recession if the next quarter Q2 GDP does not pick up! Q1 GDP quarter, January to March, is a recession for China. This is very likely that a global recession will follow even if China reopens and jump-starts their economy, due to other countries are now battling COVID-19. China will be affected due to COVID-19 in other countries and could push it to be in a recession for a year. This is serious. Do not compare COVID-19 like other breakouts and historical times!

China is highly likely in a recession now as it will be months for the world to fight to COVID-19. Other countries will fall into a reccesion including the United States!